Carl will be getting a one of a kind coffee mug with the artwork from the 80mm Off Board Artillery card printed on it.  Remember that everyone is still entered into the drawing for 12 months from the time of your last purchase on our site.

We are now stocking all Lone Canuck Publishing ASL products.  While we have always had the campaign games available, we will now be carrying all of their scenario packs including the themed packs based around the Grossdeutchland Motorized Division and the 1st SS Panzer Division.  Although Panzer Aces and the Abbey packs are never for sale, I am trying to get some as prizes for the Where the Iron Crosses Grow ASL Team Tournament. 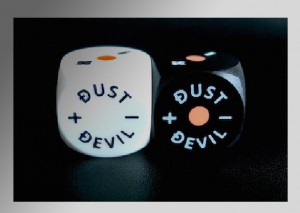 Battle Dice: A convoy of supplies from Canada has arrived at the War Table including the brand new and improved Dust Devils.  In my humble opinion, of all of the Battle Dice, these are the most useful and cannot live-without of the series.  No more hours spent dividing and rounding before each attack.  Now those of us that don’t have  second grade math skills can play desert scenarios too!

Poland in Flames: Sam insists that PIF is days from finally being in Stock.  We are getting ready shipping to ship our pre-orders as I type this.  This is a fantastic product that is bigger than Crucible of Steel and Blood and Jungle.  It consists of 6 new boards, 1,280 counters, 45 scenarios, plus lots of articles and notes.   You can order your copy here. on sale for $113.00 (suggested retail $139.00) with free shipping.

Tanks 101: Your votes are in from our poll and most people wanted a training video for tanks in ASL.  I will be posting a short AFV how-to video in our next update. Stay tuned.

I spent Saturday at the War Table first playing Ray Woloszen in FrF79 Saving the Center.  I played as the German against Ray’s Soviets.  I was unable to clear his nasty 6-2-8’s out of the buildings and with most of my guns and MG’s malf’d because of that darn severe winter +2, I threw in the towel early to save the lives of my brave cardboard troops.  I think I was more afraid of shooting at him than he was of being shot at.

Just as Ray and I were finishing up, Tim Brieaddy came over and we decided to finally a scenario from the Time on Target series.  I set up as the defending Americans in ToT10  ‘Winter Wonderland’.  Tim was quite happy to get to play with 2 Brumbars and even got a hit on my mg nest with a 30 flat. But lots of arty and a couple of hidden 57L guns was enough to keep his tanks and troops at bay.  It turned out that on ROAR this scenario  is very heavily favored for the Americans on (41:7) so not quite a fair fight.  Had we checked first, we may have done some Pleva bidding before starting.

Turn 2: Lone Canuck arrives the beginning of next week

Turn 3: Poland In flames arrives at the end of next week

Turn 4: Yanks arrives by the end of the month