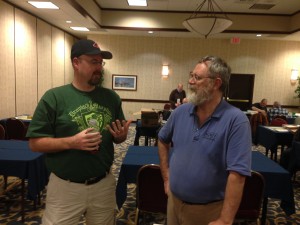 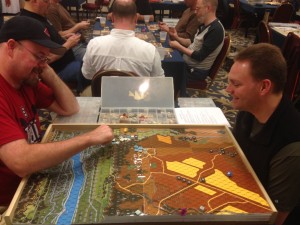 Thursday: Against the advice of my wife and the weatherman, Ray Woloszyn and I left Kernersville at noon for Bowie MD.  We arrived at the hotel around 6:30 and it was actually quite full with players but there was definitely more table space than usual and a lot less sharing tables going on.   First I head to the table to check in and I and all the other registered players are given a free copy of J11.  I also bought the new W.0. scenario pack.

Thursday evening: I picked up a game with Steven Kyle.  I had never met Steven before but sure am glad that I did.  We laughed more than we rolled.  I played as the Japanese who I really enjoy because of the little tricks I can use as the defender.  The tunnels are probably what saved me as I infiltrated back into his newly won bunker to ambush his unit.  A pretty nasty trick as you can advance concealed against his unit in the bunker for a -5 on the ambush roll.  I had a fantastic time playing him and chatting with him over the next 3 days. 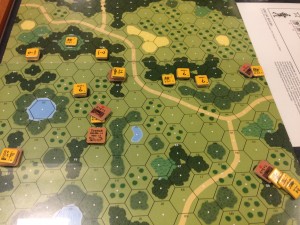 My initial set-up.  Tunnels not shown.

Friday morning: I had made arrangements to play Dan Dolan on his upcoming Dinant module.  I took over on turn 2 from Doctor Rob as the defending French.  This is one of the most beautiful maps I have ever seen.  I am sure this will be a top seller and a collector’s item (and possibly give the nudge to MMP to get the CdG reprint rolling). Stephanne from France took over for me on turn 4.  I am not sure how this scenario ended but Stephanne and Dan were still going at it 36 hours later.

Friday Afternoon:  I started my day with a game against Warren.  I have never played or met him before either and we decided to play ‘Into Vienna Woods (AP52)’.  This was going to be the one game every year that has the crazy ending story.  In my last turn, Warren is in firm control with a 9-1, 3 x 4-5-8’s in the foxhole he needs for the win.  A NMC later, all but the leader is broken leaving the hex empty for me to advance into the foxhole with a 9-1, MMG, 6-5-8, 3-4-8, and a hero.   In his last prep fire phase, a 1MC breaks the leader and the squads leaving me with nothing more than a hero to defend with.  The 4-5-8’s rush the hill and all break to the hero’s fire except for one squad that advance in.  My hero fails his CC attack so it is for Warren to roll a 8 or less (a 9 would possibly win also depending on the subsequent wound severity roll).  The poor Russians forgot to bring shovels and bayonets with a 12 on the final roll of the game.  The German hero holds the position for the win.

Friday night: John Dober is one of my favorite people in the ASL community so I always make sure to find a way to get a game in with him.  He picked an old classic ‘The Crux of Calais’.  I moved my German tanks down the left flank of the canal.  The bridge on the far left across the canal is blown so I figure that the flank will be sparsely defended.  This will allow me to get my tanks in position to hurl smoke at the next bridge to insure a safe voyage across the water.  Well I was wrong.  Three hits from his AT gun and one from an ATR leave me with 3 less tanks and one immobilized.  Looking very bleak.  I manage to cross the bridge with a few squad and surround a large group in his main defensive building with my remaining tanks.  A HMG and MMG on L2 across the water threatens to interdict any of his units from the right side that will try to reinforce the battle, so John calls it quits probably more to get a good night’s sleep than anything else.

Saturday Morning:  I get a chance to meet and play the legend ‘Jim Stahler’.  We chose AP112 First Ally.  His Poles cleaned my clock.  I managed to do nothing more than break a couple of his squads.  I didn’t enjoy playing the Slovakians with their 3 FP firing into stone buildings.  It will take a better player than me to figure out how to use them properly.  The real enjoyment was the company I shared.  After talking about the old days of Avalon Hill and the designing of Breakout Normandy and others, we had lunch together where I found out that we both have a love for Irish music and we both play the tin whistle (I carry one in my car and he carries one in his pocket).  I told him that next year I would bring a guitar or a mandolin and we would get together to play a tune or two.

Saturday afternoon:  Ron and I sit down to another new scenario J167 ‘Hart Attack’.  This scenario is set in the hills and olive groves of Tunisia.  I made a mistake (as I often do) and misread the olive grove rules believing that a tank in olive groves are hull down.  I found out the next day from Ray that this isn’t the case.  The untimely demise of his 9-2 and 2 less Grants including one falling to an underbelly hit from a tungsten shell and victory was out of reach for Ron.

Saturday Evening:      “Wild Bill” Hayward, of ASLOK fame is my next opponent.  I have never played against him before as his night shift at Oktoberfest is way past my bedtime but we have spent many hours talking and am grateful that we finally get to face off against each other.  Just the three of us; Me, Bill, and a loaf of bread.  We played J173 ‘Assault on Baerendorf’. I was happy to get to play the Americans in this one.  With 5 Shermans and oodles of elite squads I managed to almost blow the game in the first turn.  As master players often do, Bill predicted my avenue of approach and was staring at the rear of all five of my tanks with his HIP JgPzIV(L).  Boom goes the first one, but then things get worse… I roll his SAN and it drifts to my 9-1 stacked with three squads (yes, I should know better).  For random selection I roll 5-5-5-5 (3 x SAN in the bank).   He choses the leader so now I have 3 x 1MC where I roll 4-4-4 which would be great if his SAN wasn’t a 4!  So now he has six SAN rolls.  Although he misses on all six, by turn three he was up to 14 sniper checks with another kill on my 8-1 and a wound on my 8-0.  Somehow I manage to pull it off on the last turn for the win.

Sunday Morning: I got a chance to play a brand new friend named Peter Ortega.  If any of you get a chance to meet or play him, you will not be disappointed.  He is a prime example of some of the best people in this hobby.  Polite, interested in learning, and willing to share stories outside of the world of wargaming.  We played ‘Brief Breakfast’ from ‘Out of the Attic’.  Peter told me tat he plays almost exclusively with his cousin so this was a great opportunity to learn some new tactics.  We were having so much fun that we were going to play a second scenario but a snow emergency called him home.  I expect to see him at ‘Where the Iron Crosses Grow’ in April.

Sunday Evening: Tom Arnold and I played AP59 ‘Taking Heads’.  Tom had very little experience playing PTO but it didn’t show as his elite squads banzai’d across the Kunai fields to engage my .50 cal toting Philippine Army.  I tried for two turns to slow him down with fire lanes but those 4-4-8’s are tough opponents and most made it into my positions to engage in HTH combat.  A slow withdrawal and back to the village before Steve (from game 1) took over from Tom to finish the game.  The IJA as is so often the case, lost momentum with all the striping in the waning turns of the game and were unable enough to wrestle enough VP’s from the good guys.  This ended up being my final game for the great weekend.

Special mention goes out to Perry and the Youse’s who never flinched in the face of the storm.  Ken Knot who gave as good as he got we traded insults for 4 days.  The Hotel for not running out of food or patience. The attendees for showing up and making it 4 days to remember.  I will see you all next year. In the future I promise to take more notes and photos.

Chris emailed me today that the dice are in early and will be shipping tomorrow.  They are coming from Canada so it may still take a week before I can ship them out to you.  Remember, all Battle Dice are on sale this month through our website and don’t forget your 10% coupon on orders over $100.00

I had the opportunity to talk with Sam Tyson at Winter Offensive and he assures me that Poland In Flames is right around the corner.  So hopefully I will be shipping next week or the week after.  Lets all keep our fingers crossed

One thought on “Winter Offensive 2016 AAR, Dice on their way, PIF Update.”