View cart “Action Pack 13” has been added to your cart.
Sale! 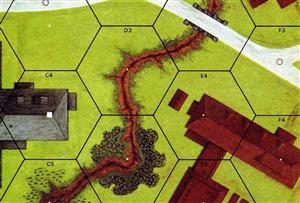 Deluxe ASL Redux is a map-and-scenario pack based on the boards and scenarios from Streets of Fire and Hedgerow Hell.

It will include:
• all eight original Deluxe ASL maps (a-h), repainted by Charlie Kibler and finished in the “tri-fold” style of Deluxe maps i-l from Winter Offensive Bonus Pack #9;
• all of the original Deluxe ASL overlays (from the 1995 Annual), also repainted by Charlie;
• six additional sheets of wooden and stone rubble Kibler overlays;
• the original 18 Deluxe ASL scenarios, all updated and rebalanced as needed;
• twenty to twenty-two (depending on layout) additional, out-of-print Deluxe ASL scenarios, also updated and rebalanced as needed;
• one box

Once we’re satisfied there’s enough interest in producing this pack, we’ll get Charlie working on painting the maps and overlays while we continue updating the scenarios (between 38 and 40 total), none of which should take too long.

Be the first to review “Deluxe ASL Redux” Cancel reply