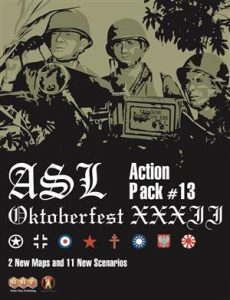 I only have one of these sets in stock and Chris is sold out so no backorders will be taken. 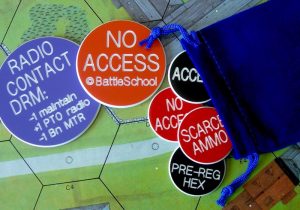 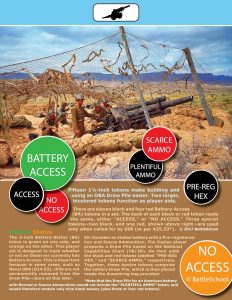 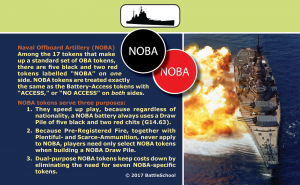 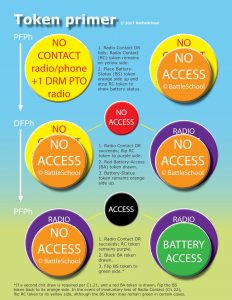 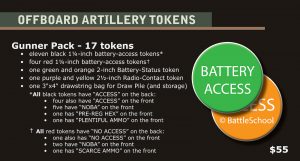 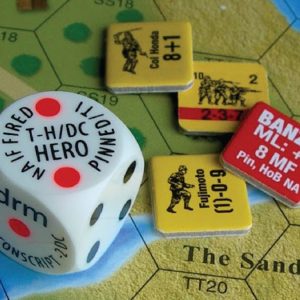 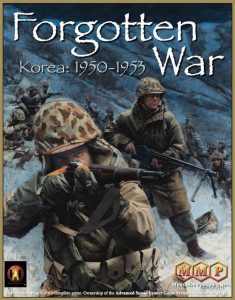 Remember that we offer the same pre-order price as MMP and we throw in free shipping.  Click on the photo to pre-order.

My experience and photos from ASLOK XXXII

I always try to arrive a day or two before the actual tourney starts.  It allows me to get my usual table in the small room and get a few informal games in with the Europeans who make the most of their airfare by showing up early. 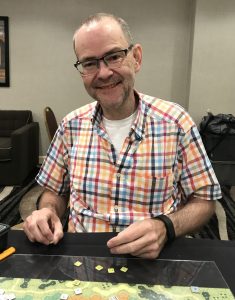 My first game was against Hennie from Holland.  We played ‘Ambush on South Knob’ from the new Action Pack.  I had the honor of trying to pry some GI’s out of a bunker on the top of a jungle hill.  As so many PTO scenarios end, one bad CC roll finished off my hopes for the V.  As fate would have it, I would get my chance for revenge in the Desert Mini. 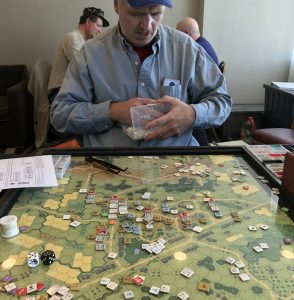 My second game was as the Russian player against Chris Brackney.  We played AP131 Cricket in Spring.  My three Russian guns did enough damage to turn the tide against the German attackers.  Nice to finally meet and play Chris. 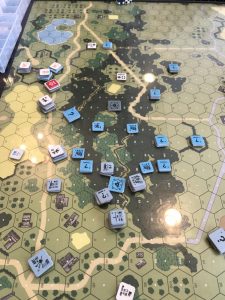 My third game was against Chris Mazzei from Germany.  I played as the German attackers against his defending French in FrF87 Mormal Forest.  Everything went to hell in the first two turns as I gambled with a mad rush with loaded halftracks trying to get behind his lines early and force him into a counterattack.  His tanks and hidden AT GUN made quick work of my AFV’s and their riders.  Almost conceding after turn 2,  I decided to hang in for one more turn to see how my infantry push fared in CC.  Well, one lucky CC after another finally overwhelmed the French and their personal moral and I pulled off an unlikely win without any ht’s. On a side note, neither one of my guns got off a single shot as my initial placement was quite horrible and the ART too heavy to move. 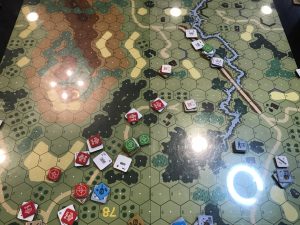 Game 4 was against my good friend and fellow Canadian Jeff Wasserman.  Every year I try to make a point of playing Jeff, Andy, and Wei who travel in together from the Toronto area.  We played yet another one from the new Action Pack; Mechanized Sacrifice.  In this almost all armor battle, billions of radioless AFV’s swarm over a raised road into German armored cars and halftracks trying desperately to get off the board.  The Germans get some PzIII’s as reinforcements (have I mentioned that PzIII’s are my favorite thing in the whole world?).  Although in this one too, I thought I had lost early, I was able to, with the help of some great ROF, stop the Russians from getting sufficient numbers off.

Game 5 was against Gary Batlett from Florida.  Although I have been friends with Gary for some years now, this was our first time ever playing each other,  Unfortunately, I don’t know what happened to the AAR or photos.  I can say that we had a great time and I look forward to seeing him again soon. 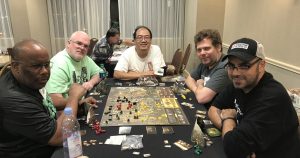 Intermission:  Tuesday night we partook in the second annual Game of Thrones the board game event.  I was able to win the game and lose a bunch of friends in the process as we backstabbed and lied to each other as is necessary to stand a chance at victory.  I look forward to betraying and being betrayed again next year.

I didn’t sign up for any of the mini tournaments prior to attending so I was put in Desert Mini as Brett needed one more player to make it an even eight.  I had only played two or three desert games prior to this so I wasn’t expecting much of a showing on my part.  My first game was against Hennie in ‘First Clash In Tunisia’  for the chance at evening  the score.  He was gracious enough to allow me to play as the Germans which I dearly wanted as they had PzIII’s (once again, my favorite).  Soon we found that the German force of 8-3-8’s, flame throwers, and a 10-2 leader were the unstoppable force and the British were lacking the immovable object to balance this one out.  The ROAR has the British with the advantage but honestly I don’t see how.  Hennie played a great game and had a solid set-up but the withering fire from the Afrika Korps was too much for the Tommies to withstand. On to round 2. 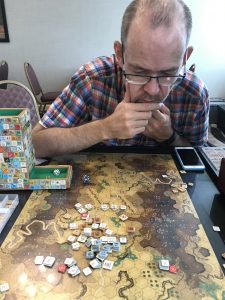 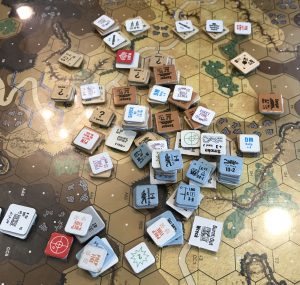 Next up was against defending Desert champion Andy Beaton in ‘Two Pounds in Return’.  This scenario featured tiny British vehicles scooting past captured British trucks armed with 2 pounders.  The German ROF of 3 did just enough damage to carry me through to the finals.

The Finals were against the Desert Black Belt Doug Sheppard.  Doug was actually the first player who showed me the desert ropes at ASLOK a few years ago.  We played J186 ‘Castles on the Horizon’.  I once again got to play with Pz.III’s so I was as happy as can be.  Blessed by so crucial breakdowns of Doug’s mortar and machine guns, I was able to overwhelm the last Hillock summit in take for the upset.  A great game agains a fun and worthy opponent.  I know it will be a while before I repeat my good fortune against him. 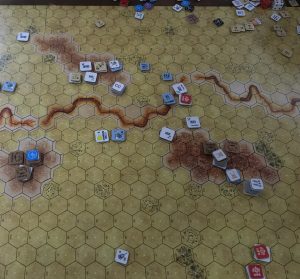 According to confidential sources inside the ASL White House, SK2 and SK3 are next on the list for reprint.

Please forgetting to add your free t-shirts to your orders over $150.  They are free!!! Free shirt, free shipping, free non-re-usable yellow padded envelope, free visit from the mail man, free explanation to the wife of where your new threads came from.  It’s free and you earned it!