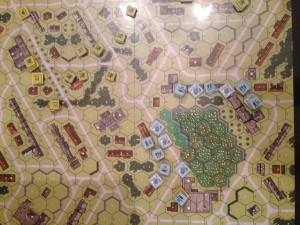 I set up with my halftracks on the right to swing all around his defenses and into the backfield of the victory area, unload and start gobbling up buildings.  One Panther is to move HD to take on his M10 in the center of the map.  My two PzIV’s will lay down some smoke for my advancing infantry.  My two Flame tanks will try to break the nearest squads while the Smoke gives them a little cover.

Turn 1 sees everything unfold pretty much according to plan.  3 US squads break.  The halftracks don’t get nearly as far as I’d like because of the ground snow. No significant casualties. 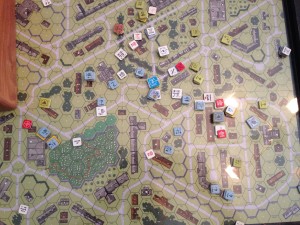 Turn 2 and there are some nasty developments including my HD panther taking an APCR turret hit from the US TD, one PzIV knocked out and another immobilized.  Luckily I was able to move a squad adjacent to the TD who stepped outside for the Panzerfaust shot.  Smores at the campfire time.  Then a baby sniper wounds my 10-2 who bleeds out.  The three squads with him have seen enough and break rendering their MMG’s useless for another turn until I can get them motivated to get back into the fight.  On a good note, one of my PzIIIFl roasts a squad and starts a flame in the building while the other breaks a squad and 9-1 leader.  The entire right flank is now defenseless and within reach of my mopping up forces for turn 3.  If I can bag them, it will bring the casualty count to 1 squad and 1 M10  KIA, 3 squads and a 9-1 leader prisoner.  Also of note, his other M10 loads a shell into the breach backwards and malfs the MA.