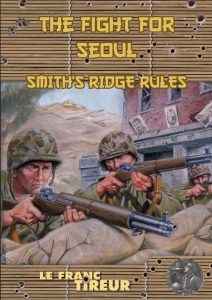 Very limited quantities! Andy Hershey, prolific creator who brought you Kreta, Kampgruppe Scherer; The Shield of Cholm, & St. Nazaire, to name but a few, has  designed this giant Korean module.    This is the largest module ever produced by Xavier at LFT.  4 Historical maps, 2 campaign games, 21 scenarios, counters, rules, play aides, charts, etc.   Pre-orders are being taken now with a 10% discount and free shipping by clicking the link. Expected to ship to you by Christmas 2019.

N.B. If you do not own Forgotten War: Korea yet, I am making an unbelievable package deal for both the Korean Module and Fight For Seoul.

“The Fight for Seoul” contents,  will come in a shrink-wrapped box
Smith’s Ridge module:

all of the above, shrink-wrapped
Countersheet
LFT style (with a mix of 5’8″ and 1’2″ counters). 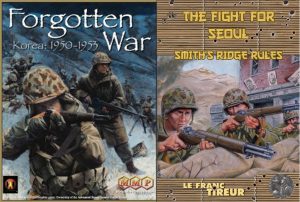 A $53.00 savings when buying both modules.  Ships around Christmas.

12 scenarios and 2 map boards on sale with free shipping. 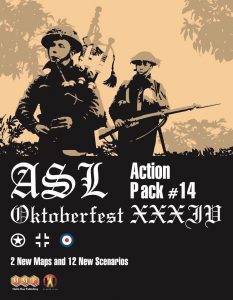 AP 14 takes a deep dive into the battles in France throughout Normandy and Brittany in the late spring and summer of 1944. From D-Day to the Falaise Pocket to the drive on Brest, these 12 scenarios explore the fierce fighting engaged in by the infantry, armor, and mechanized cavalry of the American, British, and Canadian forces attacking (and being counterattacked by) a wide range of German defenders, primarily fallschirmjäger and elite SS forces. The scenarios are created by veteran designers Pete Shelling, Bill Sisler, and Ted Wilcox and developed under the guidance of veteran playtesters and tournament directors Bret Hildebran and Bill Hayward. These scenarios will stretch your tactical knowledge and skills, with many different situations. Bocage features heavily (but far from exclusively). There is one night paradrop scenario, and one is an assault on a fortified gun battery, but none of the scenarios uses offboard artillery. Several scenarios feature combined arms on both sides, several more combined arms on only one side, and several are infantry only.

Two new boards were designed specifically for this pack and feature significantly in its scenarios. Board 84 features a large hill mass next to a small village with many hedges, numerous orchards, and scattered woods conveying a very claustrophobic rural terrain. Board 12a/b features a larger village with stone buildings partially surrounded by a board-length gully, with orchards, grainfields, and hedges throughout. Both boards show off the skill of artist Charlie Kibler. With great boards and great scenarios, Action Pack #14 is sure to be a winner.

Race for the Meuse 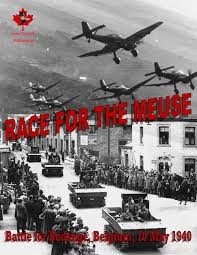 Brett and Bill kill it again with the greatest congregation of ASL’ers for the 34th straight year.  This little post is of my personal experience and will certainly leave out many of the events and matches that were more interesting and noteworthy.

I arrived Saturday around noon and set up in the same spot that I have camped at for the past decade or so, in the front area, not the main room.  This helps me with my anxiety around large groups of people.  My first match was a biggie against my good friend Jack Daniels (not the drink).  Last year we played the campaign game of Hatten in Flames, so this year, not to be outdone we wanted to play something big again.  At first we decided on playing Andy Hershey’s brand new Kreta scenario ‘Fallschirmjager Graveyard’ from Dispatches from the Bunker but I as worried that I didn’t have enough counters to accommodate the 80+ squads on each side.  So we decided on the Battle for Wiltz (not to be confused with ‘Road to Wiltz’) from George at LCP.  This takes place on a stunning map with pine forests and villages.  The game takes place over  linked scenarios where the next scenario OB is comprised of the survivors of the last scenario.  We made it to the end of scenario 2 before we called it for lack of US squads but not before Jack executed the nastiest AT ambush I have ever had the displeasure of being on the wrong end of.  His two AT guns (one manned by a green HS) knocked out five Hetzers and  a StuG in perfect triangulation.

I went on to play another 9 games including 6 in the mini tournaments.  Because I hadn’t signed up for any minis, Bret put me into the Partisan mini.  I have never played with/against partisans and to be honest I wasn’t looking forward to it but sweet sassy mollasy did I ever have a great time.  In one scenario against Pat Palma, in which I as the Polish partisan, I was emerging from sewers behind his SS and dropping DC’s on his Panther from the second floor building, and throwing Mols whenever I got the chance.   What a hoot.  Moral of the story is to try new stuff, you won’t be disappointed.  I was also placed in the Desert mini and played Khamsin in the final round against Michael Rogers.  If you haven’t tried this scenario, you should.  I will change your view on the Desert.  It get’s really close up and personal because of the heavy wind and heavy dust.  It also gave me a chance to use those awesome Dust Devil Battle Dice which does the rounding for you.

I was so happy to see so many of my good friends again this year and make many new friends but sad that so many were missing.  There are some fine restaurants in Cleveland that I try to hit each year.  Whether it’s  Sokolowski’s Polish restaurant,  Der BrauMeister German restaurant, or Denny’s.  Always great food and even better conversation. 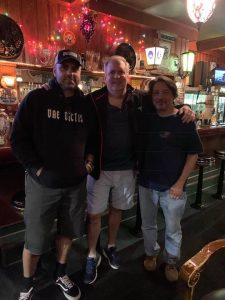