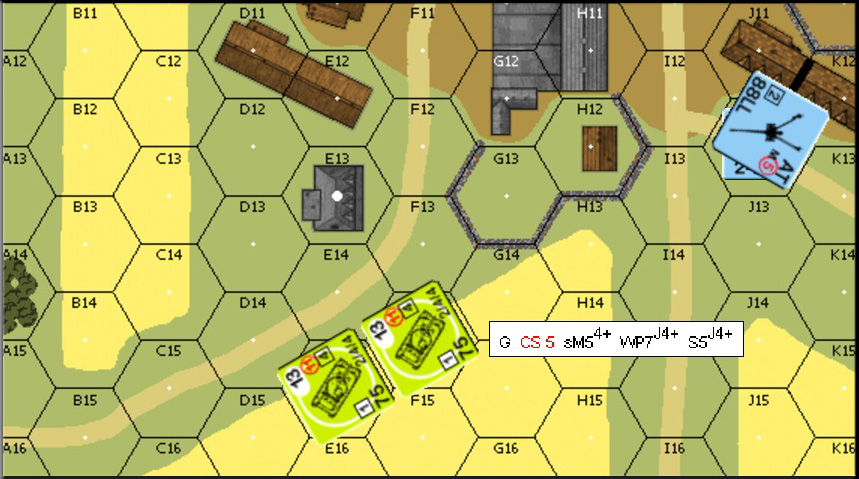 Best of Friends 2 follows 2013’s Best of Friends with 12 more scenarios from the Swedish Friendly Fire ASL Tournament and also includes an 8˝ × 22˝ geomorphic mapboard that originally appeared in Friendly Fire Pack 6 and has been repainted here by Charlie Kibler as board 85.

As with Best of Friends, the 12 scenarios in Best of Friends 2 have been updated using official layout and terminology, and in some cases updated for balance. This collection presents a selection of scenarios designed by Mattias Rönnblom, Martin Svärd, Chris Mazzei & Peter Struijf, and Pete Shelling and cover a variety of actions from 1939 to 1945 that feature German, Japanese, New Zealand, Polish, and Russian forces in some of the best tournament-sized offerings available in ASL. We’d like to thank the Friendly Fire team for the scenarios in this pack!

Designed for the aficionado, Best of Friends 2 is not a complete product and assumes the buyer owns the core Advanced Squad Leader game system.

N.B. This item may take a couple of weeks to ship.

Designed for the aficionado, ASL Roma 2020 is not a complete product and assumes the buyer owns the core Advanced Squad Leader game system.

N.B. This item may take a couple of weeks to ship

Unfortunately MMP is not shipping to retailers yet so this item will be delayed a bit and therefore being put on pre-order.

Action Pack #15: Swedish Volunteers is MMP’s production of the original Swedish Volunteers scenario pack by Martin Svärd and Erik Leander. Technically neutral during WWII, Sweden still offered her assistance in the wider defense of her Nordic neighbors through the formation of Frivilligkåren (the Volunteer Corps). Though this corps was demobilized in 1940, Swedish volunteers continued to see action during the German invasion of Norway and later during the Continuation War allied with Finland and Germany against the Soviet Union.

The 16 scenarios in Action Pack #15: Swedish Volunteers include all 14 from the original release, which have been updated using official layout and terminology, and in some cases updated for balance, as well as two additional scenarios, one previously published by Friendly Fire and one brand-new scenario. These cover a variety of actions from the Swedish defense of Märkäjärvi, Finland in 1940 during The Winter War to Swedes united with Norwegian and British forces in Norway during Operation WESERÜBUNG to battles against Soviet forces during the Continuation War of 1941-44.

Designed for the aficionado, Action Pack #15: Swedish Volunteers is not a complete product and assumes the buyer owns the core Advanced Squad Leader game system.

Note: This product is possibly months away from shipping as MMP has run out of countersheets and is therefore not yet shipping to retailers.

It is the last American turn of the game. In order to win, you, the American player must exit one AFV with functioning MA off of road hexes A15/A16. It is January 1945, Mild Breeze from the NE (top of map is North). The Americans are Elite by SSR. What will you do to ensure the best chance for victory. Winner gets a $10 gift code to Ritterkrieg.

So the first thing to note is that the Soviet tank must go CE immediately in order to exit the map as he only has 7 MP’s remaining. So let’s look at the odds for the German player to stop the T-34 based on his options. Note that it is not necessary to destroy the tank as even a mere failed PTC will cause the tank to BU and deprive it of the road bonus and make exiting impossible.

The three types of attacks available to the German are IFT, Panzerfaust, and CC Reaction Fire. Let’s look at the numbers for each individually.

Panzerfaust: Since it is 1945, the chance that the Squad would have a PF is 66.7%. If the availability dr is successful, the best chance for a hit would be in hex E8 using the leadership and eating the backblast would be 58.3% (Base 10, +2 Range, +2 Motion, +1 Restricted Aim, -2 Leadership = 7). Combining the availability dr, the TH DR, and the chance of rolling a Dud, you are left with a meager 38.2% of taking out the tank. On top of this, you have used your leadership, you have risked pinning on your availability check, pinning/breaking/CR on the backblast, and risked CR on a TH roll of boxcars, making a subsequent first fire attack have even less chance of success if even possible. There is the option of firing the PF without eating the backblast and/or not using the leadership DRM but this is a Hail Mary shot that would increase your overall odds of taking out the tank by about 2% while reducing your chances on other forms of attacks by more than 2% because of the possibility of pinning on the availability roll or the PF exploding in your face on the TH roll.

So firing on the IFT 3 times 8FP would yield an 87% chance of victory, Firing once on the 16 and once on the 8 would yield an 84% chance. Firing on the 8FP in G9, then PF (No Backblast or leadership in F8), then 8FP (F8), then 8FP (FPF in E8) would yield 89%. Because of the almost 20% chance that 6 is rolled on the check or a 12 is rolled on the shot, this option is not worth the extra 2% chance of success. Street fighting twice in hexes F8 and E8 would yield a 86.5% chance. Firing IFT in G9 and then Street Fighting twice in F8 and E8 would be 89.8% (this is actually too high as the chance of a second CCRF attack is lower because the squad may have pinned or been CR during the first CC attack). So I believe, if I calculated this correctly the greatest chance of success would be to fire small arms at the CE crew in G9, then Street Fight in F8, followed by more street fighting in F8 – OR- fire 3 times using the IFE. I expect much debate on this as I am sure I left something out or my math has let me down. But this is based on pre-plotting your actions before seeing the results as they transpire. Of course a more realistic answer would be to create a flowchart. Because of the crazy complexities and permutations of this puzzle, I am declaring everyone who answered with a solution a Winner! I will be e-mailing you a Ritterkrieg $10 gift code. Thanks for playing. My brain hurts.

I have often pondered the choice of combining into one Firegroup for a higher column on the IFT, or making two lower strength attacks. What I have found is if the net DRM is 0 or negative, split the attacks. If the net DRM is positive, make one combined attack. Although this is oversimplification and there are several notable exceptions and it leaves out many variables like Cowering, MG breakdown #’s, Snipers, other potential targets if your first attack succeeds, it is a good rule of thumb to go by when you are playing someone who doesn’t appreciate you thumbing through tables before each shot. In the diagram below, the Minor player has a 28% chance of affecting the squad in L6 with a combined 12 FP attack but only a 22% chance by making 2 x 6FP attacks. But when firing at the Squad in N7 he has a 58% and a 64% chance respectively. In each case, making the right decision was worth an extra 6% chance of success. For a closer look, see page 39 in ASL Classic.