The pack contains one new board (73, designed by Bill Sisler) and 10 new scenarios (designed by Sisler, Pete Shelling, “Wild Bill” Hayward, and Bret Hildebran). These scenarios are: 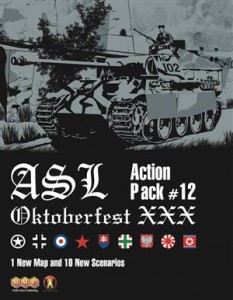 Be the first to review “Action Pack 12 – ASL” Cancel reply