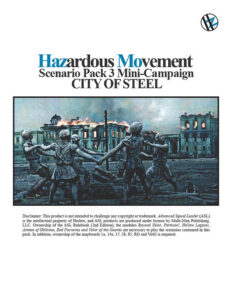 Hazmo21: GOODBYE CRUEL WORLD
Central Stalingrad, USSR, 16 September 1942: Soviet strongpoints throughout the city had to be
assaulted in nightmarish, close-quarters fighting. Nowhere was this ferocity more in evidence than at
Railway Station No. 1 . . .

Hazmo22: WAITING FOR THE WORMS
Central Stalingrad, USSR, 17 September 1942: In some sectors, the Germans were able to push all the
way to the Volga and directly interdict Russian reinforcements ferrying across the river. The 13th Guards
launch a desperate counterattack to eliminate the threat . . .

Hazmo23: EMPTY SPACES
Central Stalingrad, USSR, 21 September 1942: The Germans make a renewed push to reach the Volga,
with the object of splitting the 62nd Guards in two. In their way stand the stalwart 13th Guards, along
with scattered remnants of NKVD militia . . .

Hazmo24: COMFORTABLY NUMB
The Red October Factory, USSR, 24 October 1942: Grimly determined to prevent the 62nd Guards from
being cut in half, the Russians launch an attack from the south to buy enough time to enable the 39th
Guards to ferry across the river . . .

Hazmo26: THE HAPPIEST DAYS OF OUR LIVES
The Red October Factory, USSR, 10 November 1942: By now, the ominous approach of winter and
dwindling supply lines have forced the invaders’ hand. After a relatively lull in the fighting, the Germans
launch one last massive offensive intended to break the back of the Soviet 62nd Army . . .

Hazmo27: THE SHOW MUST GO ON
The Red October Factory, USSR, 10 November 1942: Operation HUBERTUS, the final effort to capture
the Red October Factory complex (and thus Stalingrad itself), was launched in the early morning with a
massive artillery barrage and concentrated Stuka attacks. Soon thereafter, German pioneers and infantry
storm the Martenovskii Shop from two directions . . .

Hazmo29: THE HEIGHTS OF HUBRIS
South of Verkhne-Kumsky, USSR, 18 December 1942: Operation WINTERGEWITTER, the attempt
to relieve Stalingrad, could not be allowed to succeed. The Soviet 4th Mechanized Corps, firing from
prepared positions on the high ground, resolved to stop the Germans in their tracks . . . or die trying . . .

Hazmo30: ORPHANS OF SATURN
Nikolayevka, USSR, 26 January 1943: In the wake of the success of Operation SATURN, the commander
of the elite Italian Alpini, Gabriele Gabriele Nasci, knows he has no real choice. Faced with the utter
annihilation of his unit, he orders a daring – almost suicidal – breakout to the west . . .

Be the first to review “Hazardous Movement 3” Cancel reply