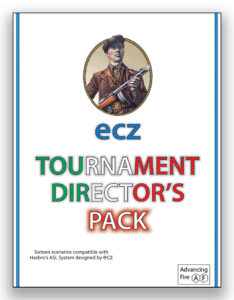 Advancing Fire normally works only on deeply historical games, but this time we are proud to produce a game from an important external developer, that is a unique and very interesting release.

TOURNAMENT DIRECTOR’S PACK (TD’S PACK) is the collection of ASL scenarios designed by Enrico Catanzaro (known in ASL community as ecz)  with an experience of about thirty years as ASL player and Tournament Director of ASL tournaments, as well as wargamer and chess player. His main attention turned in particular to the balance and replayability, while trying to develop interesting and innovative dynamics. The Tournament Director’s Pack features 16 scenarios all using dedicated new rules which are used to decide sides and Victory Conditions at once. We made sure the scenarios were playtested by many different level players, from the best who won many tournaments to the inexperienced ones, and they have shown, with their rules for determining the VCs, to be suitable for all levels, and to have a very high replayability. These scenarios are ideal for use in tournaments or to practice competitive ASL, maintaining a high adherence to the war events they represent.

† = Valid only with the purchase of at least another one TD’S PACK at full price. Up to four copies of TD’S PACK may be added per parcel.

(All prices include shipping)

ecz1 The Bet,  Trøgstad, Norway, April 1940. An old classic first created for a scenario design contest on the Game Squad forum and later published by Le Franc Tireur (LFT 181). This is the scenario where CBS made its debut. The Germans must control a village defended by a Norwegian MG company. 5.5 turns on two boards.

ecz2 Liberating Bukovina, Bukovina, July 1941. 6.5 turns and three boards for a Romanian attack vs Russians in the first stage of Barbarossa. Cavalry and tin cans in the OB.

ecz3 Turf Wars in Mongolia, Mongolian-Manchurian border dispute in May 1939. Two boards and 5 turns for this all-cavalry action (with the exception of only two MMCs not mounted at the start). In this scenario Steppe terrain and Sun Blindness are in effect.

ecz4 Flash and Thunder, Neuville-au-plain River, Normandy June 1944, in the first hours of the D-Day. A company of Paratroopers tries to find their officers, regroup, and move toward its objective, avoiding the German garrison patrolling the area and increasing its presence turn by turn. Three boards and 7.5 turns for this scenario where movement is crucial.

ecz5 The Good and the Bad, Montefiorino Italy, July 1944. The final action of the largest Partisan battle fought in Italy. In this scenario (three boards and 7 turns), Fascists and SS using Armored Cars, Flamethrowers, OBA and a lot of firepower, jointly attack a small town defended by elements of the Partisan Division ‘Modena’. The Defenders must stay in the town as long as possible to prevent the Fascists from making a large scale encirclement and exiting off the opposite board edge, and try to save their lives by retreating into the woods before it is too late.

ecz6 A Diurnal Assault, Central Stalingrad, October 1942. 7 turns. This time the Russians are on the attack, but they must watch for a German counterattack. In this scenario, setup is sequential, counter by counter. Both players have the chance to attack in depth or to play more conservatively to parry the enemy offensive blow by blow. Soviets have Rocket OBA!

ecz7 Clash of Cans, Guadalajara, Spain, March 1937. The first attempt at a large scale armored blitz by the Italian army during the Spanish civil war in this all (tin can) armor scenario. Six Italian L35s face 4 Light Russian tanks in a three board, 6 turn scenario. Clash of Cans is a complementary scenario to ‘The Puma Prowls’ that could easily be used as a teaching tool for AFV rules, particularly the platoon-movement rules which aren’t used in the Puma Prowls scenario.

ecz8 A Hot Week in Sicily, Sicily, August 1943. Again in Sicily for the crucial moment of the battle for Troina. The men in Monte Basilio were isolated, flanked and were suffering ammo and water shortage, but they held heroically against the final push of the 15th Panzer Granadier division in this 6 turn, three board scenario.

ecz9 Culquaber, Ethiopia, November 1941. This time the action moves to the Italian East-African colony where the elite ‘Carabinieri’ fought a hopeless battle against an overwhelmingly superior enemy force on the famous ‘Cliff of the Crags’. In this 7 turn, two board scenario there are also warbands of natives fighting each other as allies of the Commonwealth and of the Italians.

ecz10 The Capture of Malta, Krendi Airfield, Malta, July 1942. A fictional, ‘what if…’ scenario in which the Italians and Germans jointly launch ‘Operation Hercules’. We can see German Paratroopers and Italian Marines of the ‘Battaglione San Marco’ fighting together against the Malta garrison in a 6.5 turn scenario on three half boards for the capture of a small airport in the south of the island.

ecz11 Blood and Brine, Calais, France, May 1940. Another scenario created for a design contest on the Game Squad forum. In the dramatic days of the great retreat of the BEF, the battle of Calais was decisive to delay the German advance to Dunkirk. Blood and Brine is a two board, 6.5 turn scenario featuring a very peculiar SSR about ‘random (German) air attacks’ on the British units tied to the SAN.

ecz12 A Tragic Victory, Vilnius, Poland, July 1944. Another scenario coming from a design contest. The dramatic last battle of the Polish Home Army, winning on the field against the Germans, but doomed to deportation by Soviet hands in the following days. In this 5.5 turn, two board scenario, with the help of the Russians of the Belorussian Front, the Polish force successfully closed any escape path for the Germans trapped in Vilnius.

ecz13 Leaving Changsha, South-Central China, October 1939. This urban, 5.5 turns, Sino-Japanese battle on two half boards depicts the attempt of the Japanese 13th Division to break the encirclement and leave Changsha. This was the first great defeat of the IJA.

ecz14 The Streets of Shanghai, Shanghai, August 1937. A large, 7 turn scenario on two full and two half-boards highlighting the major Chinese land offensive to free the city. A mostly infantry scenario with the exception of a few ACs and Chinese light tanks trying to clear their way across rubble and debris.

ecz15 The Best Defence, North of Aachen, October 1944. Facing encirclement, the Germans try to widen the gap between the two American pincers around Aachen with a local armored counterattack. 6 turns and two boards for this ‘heavy armor’ scenario.

BR11 Fields of Golden Wheat, Sicily, July 1943. This scenario is the ‘prequel’ to Scenario T9, The Niscemi Biscari Highway. It depicts the events that happened earlier in the same day that led to the capture of the pair of Italian AT guns that were later used by the Paratroopers against the Germans. Two half boards and 5.5 turns for this small scenario. 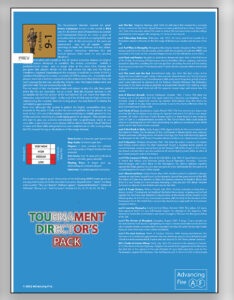