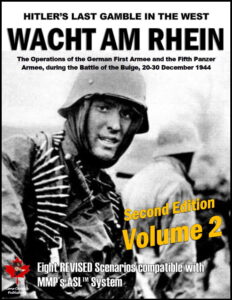 On 16 December 1944, the Germans launch the last major offensive of the war, initial called Wacht am Rhein (Watch on the Rhein) and later changed to Unternehmen Herbstnebel(Operation Autumn Mist), it was an attempt to push the Allied front line west from northern France to northwestern Belgium. The Ardennes Offensive or more commonly known as the “Battle of the Bulge”, so-called because the Germans created a “bulge” around the area of the Ardennes forest in pushing through the American defensive line, was the largest fought on the Western front.

This pack is the 2nd Volume of the 2nd Edition of the Wacht am Rhein Pack, picking up from where Volume 1 left off. All scenarios have undergone some modification, be it to their order of battle, boards, or victory conditions, similar to what was done with Volume 1.

WaR 9 – SAMRÉE,, BELGIUM, 20 December 1944: The 116.Panzerdivision was ordered to retrace its footsteps and head northwest through Houffalize towards La Roche and Samée instead. The 7th Armored Division’s main supply depot had been moved to just outside Samée and the only other defenders around Dochamps and Samée at this time were engineers of the 51st Engineer Combat Battalion. (Estimated playing time: 6 hrs 24 mins)

WaR 11 – GREVILS-BRÉSIL, LUXEMBOURG, 23 December 1944: Called out of OKW Reserve on 22 December, the Führer Grenadier Brigade would try to fill the vacuum between the 5.Fallschirmjägersivison and the 352.Volksgrenadierdivision. Kahler put one company of Fusiliers apiece into Eschdorf and Heiderscheid and sent two south with a platoon of Panthers to Grevils-Brésil, hoping to establish contact with the leading regiment of the 352.Volksgrenadierdivision. (Estimated playing time: 6 hrs 50 mins)

WaR 12 – LHEIDERSCHEID, LUXEMBOURG, 24 December 1944: Fresh from reserve, the understrength 79.Volksgrenadierdivision assembled behind the Führer Grenadier Brigade near Eschdorf. After a ten-minute artillery barrage, it  attack Heiderscheid just before dawn. The village was defended by the Americans of the 2nd Battalion, 319th Infantry Regiment. (Estimated playing time: 7 hrs 0 mins)

WaR 13 – ROCHEFORT, BELGIUM, 24 December 1944: Kampfgruppe von Poschinger,  took St. Hubert without any resistance on the night of 22 December before continued onwards to the important road centre of Rochefort. Early on 23 December, the Germans shelled the town before sending in reconnaissance patrol, which reported the town undefended. Rochefort was in fact well defended by the Americans of the 3rd Battalion, 335th Infantry Regiment. (Estimated playing time: 4 hrs 33 mins)

WaR 14 – VERDENNE, BELGIUM, 24 December 1944: The La Roche Bridge had to be repaired by the division’s engineers; so, after withdrawing from Hotton, it was not until 23 December that the westward advance of the 116.Panzerdivison resumed. The intention of the commander of the 116.Panzerdivison, Generalmajor von Waldenburg, was to cut the Hotton-Marche road, capture Marche, and advance toward Ciney, securing the right flank of 2.Panzerdivision. (Estimated playing time: 7 hrs 0 mins)

WaR 15 – FOY-NOTRE-DAME, BELGIUM, 25 December 1944: By midday, 23 December, Kampfgrüppe von Böhm had reached Buissonville and by nightfall was just outside Achêne, only 20 kilometres from the Meuse at Dinant. Even Feldmarschall von Rundstedt sent a message of congratulations, for nowhere else had the offensive achieved so much. By midnight saw von Böhm‘s men at the hamlet of Foy-Notre-Dame with only 6 kilometres to their goal. (Estimated playing time: 16 hrs 32 mins)