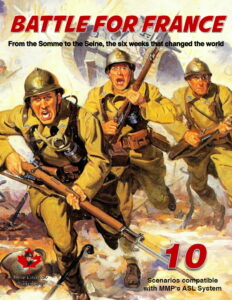 On 10 May 1940, the Phony War came to an end. Germany launched Fall Gelb (Case Yellow) with the goal: the destruction of the French First Army and control of the Low Countries and the part of France north of the Somme and Aisne Rivers. By the end of May, the Wehrmacht had concluded Fall Gelb with stunning success. On 5 June 1940, the Germans launched Fall Rot (Case Red), which called for the complete destruction of the remaining Allied forces in France and the occupation of the whole country.

This scenario pack has ten scenarios spanning the six weeks from the battles along the Meuse River to the Mediterranean Riviera, and is compatible with MMP’s Advanced Squad Leader™ System.

#1 – No Shortage of Valour, 15 May 1940: The 5. and 7.Panzer-Divisionen overran the remnants of the 11e armée’s left flank while the 1. and the 2.Panzer-Divisionen overran the 11e armée’s right flank. In order to buy time for the 2e division cuirassée to arrive, General Touchon, commander of the newly formed 6e armée, ordered Colonel Olivier Marc’s 3e brigade de spahis and a company of FT-17 tanks from the 33e bataillon de chars de combat to hold back the Panzers for as long as possible. Colonel Marc recognized this order as a “die-in-place” mission and quickly set about fortifying the village.

#2 – French Aggression, 22 May 1940: Wanting to continue his advance, in an effort to keep the Allies from regaining their footing, Rommel turned over the defence of the village to a battalion from Schützen-Regiment 14, 5.Panzer-Divison. With little time to consolidate its position, I./Schützen-Regiment 14 was unable to form a cohesive defence. Seizing the initiative, Lieutenant-General Rene Prioux, commander of Corps de Cavalerie, gathered up a squadron of Somua S-35 tanks and a battalion of motorized infantry from the 1ère Division légère mécanique, and with some artillery support launched a hasty counterattack at 17:00 hours.

#3 – French Courage, 29 May 1940: The 4e division cuirassée (DCR) under the command of newly promoted général de brigade Charles De Gaulle arrived in the Abbeville sector shortly after noon. De Gaulle immediately issued orders to his commanders for a hasty attack to commence at 17:00 hours. At 17:15 hours, after a short and intense artillery bombardment, 4e DCR commenced its attack. The main effort was a frontal assault by the 6e demi-brigade blindée supported by the 4e bataillon de chasseurs portés.

#4 – French Determination, 29 May 1940: The French attacks of the previous day had shaken the Germans’ morale, but not broken it. De Gaulle knew that he had achieved some success and he wanted to demolish the German bridgehead. At 07:15 hours, the 4e division cuirassée resumed the offensive with a combined arms attack of Char B1-bis from the 47e bataillon de chars de combat (BCC) and R35 from the 44e BCC supported by infantry from II/22 régiment d’infanterie coloniale (RIC) and artillery.

#5 – Resolute Defence, 5 June 1940: The sector was only screened by the depleted 2e and 3e division lègére de cavalere (DLC), both of which were still recovering from their attacks on Mont Caumont a week earlier. The 5e division d’Infanterie coloniale (DIC) was order to move up and replace the 3e DLC, but this move was not completed until the night of 4/5 June. When the sun rose, German infantry units of the Schützen-Regiment 6 managed to capture a railroad bridge across the Somme River. By 06:00 hours, vehicles of Rommel’s 7.Panzer-Division were flowing across the Somme and advancing south.

#6 – Stand at Rouen, 9 June 1940: After the problems encountered with the British strongpoint six kilometres north in Isneauville on the previous day, Generalleutnant Lemelsen took no chances and decided to make a set-piece attack into Rouen in full daylight. Lead elements of 5.Panzer-Division enter the city around 08:30 hours and were halted by the 5e groupe franc motorisés de cavalerie.

#7 – Steel Mammoths, 10 June 1940: The Germans attacked out of their bridgehead at dawn and rapidly surrounded elements of the 2e division d’infanterie in Perthes, Tagnon, and Juniville. However, all the surrounded French strongpoints put up fierce resistance. The 3e division cuirassée moved into position to launch a counter-attack at 16:00 hours to relieve the encircled garrisons but needed to conduct a tactical refuelling en route, forcing Colonel Louis Bussion to launch the attack with whatever tanks were ready.

#8 – Clash at Juniville, 10 June 1940: Just after first light, the Germans had broken through the French main line of resistance along Ainse River and quickly enveloped elements of the 2e division d’infanterie in Perthes, Tagnon, and Juniville. Throughout the day, the Germans launch three unsuccessful assaults against the outnumbered and encircled French strongpoints. The 3e division cuirassée moved forward to launch a counterattack at 16:00 hours in an effort to relieve the encircled garrisons.

#9 – The Shield of France, 14 June 1940: Since the start of Fall Gelb, Armeegruppe C had only been involved in diversionary attacks against the French defenses in the Maginot Line. However, as the German attacked succeeded in destabilizing the French defences in the rest of France, the French command was forced to withdraw more and more units from the Maginot Line. The German Command decided it was time for Armeegruppe C to attack and Führer Directive 15 was issued.

#10 – Mussolini’s Gamble, 21 June 1940: After the fall of Pairs and Lyon, Italian leader Benito Mussolini worried that France might collapse at any moment, yet his army had not struck a single blow. He told his son-in-law, foreign minister Count Ciano that he needed 1,000 dead in order to sit at the peace table with France. Consequently, he pressed Marshal Badoglio to begin a ground offensive against France as soon as possible.