From the Cellar 11 – Le Franc Tireur 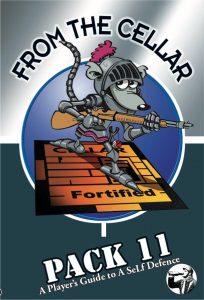 Our latest issue of “From the Cellar”, this time containing an in depth article from one of the very best players if not in the World, at least in Europe !

With 10 accompanying ETO only scenarios that will take you from Dunkerque to the snow covered Russian winter, Italy or Walcheren island and the replacement countersheet for “The Green Hell of Inor”, countersheet # 3, of course at absolutely NO ADDITIONAL COST.

The Halt Befelh at the end of May didn’t stop the attacks on the Dunkerque pocket by German infantry. At the beginning of June, the pocket was still defended by several French divisions that , despite the losses were still holding firm against Germans attack. On the 2nd of June a first counter attack was launched by one battalion supported by six Somuas. The attack managed to gain two kilometers but was stopped thereafter. Another attack was decided for the following day with all the troops available, namely only two exhausted infantry battalions and the last tanks of the 1ère Brigade Légère Mécanique. With the lack of coordination typical of French attacks in May, the attack was launched at the end of the night. The objective was to take the Basse-Colme bridge and so gain some space for the last ships.

KUTRIK, VOLCHOV, RUSSIA, April 2nd 1942 :In an effort to relieve the encirclement of Leningrad, on the Volchov Front, the Second Shock Army had been trapped with approximately 130,000 men inside the pocket but succeeded in creating a small breach inside the German defenses. Without losing time, the Russians prepared a follow up operation in order to widen the breach, and afterwards, to resume the advance towards Novgorod. The mission was given to the 225 Rifle Division, led by Coronel Konstantin Yuvenalievich Andreev, supported by the remaining tanks of the 193 Independent Tank Battalion. At dawn on April 2nd, the first attack was repelled with many losses among the attackers due to the lack of supporting armor. But at noon, the tank battalion was committed and would spearhead the following infantry attack…

Kolsovo, Russia, 28 July 1942 :Although Soviet tankers had a lot to learn from their more experienced adversaries, a number of units had accumulated a good deal of skill in the hard winter ‘41 fighting. An example was the encounter between two Soviet tank brigades and the 11th & 19th Panzer Divisions during the German drive against Kolsovo, on the Bryansk Front. The German attack was into a natural pocket formed by woods to the west, the Vitebsk River to the north and the Resseta River to the east ; the town of Kolsovo was in the north just below the river. 19th Panzer advanced along the edge of woods while 11th Panzer moved up the river. The initial attack was launched against a series of entrenched anti-tank guns and infantry. Once through this defensive belt, 19th Panzer got entangled with two companies of BTs which darted in and out of the woods. As the 19th tried to root out the harassing light tanks, 11th Panzer became the victim of hit-and- run attacks by a T-34 company using uneven ground for cover. The outnumbered Soviets refused an engagement which would have pitted them against a better-equipped foe. The T-34s finally lured some of 11th Panzer’s tanks into hilly terrain, where they were ambushed by dug-in KVs.

Svidovok, Russia , 13 November 1943 : After their disastrous drop during the Kanev Bridgehead battle, the remaining soviets parachutists took refuge in the woods. They were supplied partly by PO-2 planes and the local partisans. Colonel Sidorchuk chief of the 5th Parachutists Brigade managed to gather a force of 1200 men during October 1943. At the beginning of November, they were assigned the task to help the Russian crossing of the Dnepr near the village of Svidorok, north of Cherkassy. They had to take by surprise several villages to allow the 254th Rifle Division an easy crossing. During the night of the 13rd they took Svidorok but the neighboring Germans were quick to react and a column of infantry supported by assault guns soon came from Dakhnovka village. They were attacked by the covering force left by Sidorchuk, a small force armed with automatic rifles and anti-tank rifles.

RudnIaweresnia, Russia, 9 December 1943 : On the morning of the 9th December, orders were given to the 4.Panzer-Division to renew the link with the 291.Infanterie-Division to its right. At 10 AM the Luchs from 4.Panzer- Division were tasked with the support of some men of a pioner-kompanie to take back the village of Rudnia Weresnia that was occuped by some recon elements and Russian infantry.

Acquafondata, Italy, 12 January 1944 : On January 9th 1944,the 3ème Division d’Infanterie Algérienne (3ème DIA) completed the relief of US 45th ID, under very bad climatic conditions (snow and freezing rain). Facing these French troops were numerous bare hills under the control of German GebirgsJager Division 5. As part of a combined attack with the French 2ème Division d’Infanterie Marocaine (2ème DIM) planned for January 12th, at 06h15, the 3ème Régiment de Tirailleurs Algériens (3ème RTA/3ème DIA) was ordered to take control of the Monna Acquafondata heights and then exploit any gaps along the Vallerontonda-San Elia road to the Rapido River and Cassino. Army corps artillery and air support would support the assault.

Dornot bridgehead, France, 8 September 1944 : One of the tentative attempts to cross the Moselle River in eastern France was made south of Metz by the former forts of the Maginot Line. On the morning of the 8th September, a crossing was made under fire near the village of Dornot, and a bridgehead was established. In the afternoon, Companies F and G from the 2nd Battalion, 11th IR started to advance to take the ancient French fort of St Blaise, located in front of the bridgehead at the top of a wooded hill. Despite the confusion persistent in the bridgehead, the units made good progress against light opposition, but were stopped by the fortifications and by artillery barrages both friendly and enemy. At this moment German counterattacks from the north and south began, and the only chance to escape encirclement for the two companies was to fight their way back to the river.

Near Dishoek, Walcheren island, 2 November 1944 : With its four 150mm guns, the Dishoek battery (W11) was one of the most powerful German position on Walcheren Island. These guns caused heavy casualties during the Westkapelle landing (Operation INFATUATE II) and neither NOBA nor Typhoons aircrafts were able to silent its huge concrete casemates. On the 2nd November, the 47th Royal Marines was tasked to silent these guns by a direct attack, the sea and the flooding preventing any bypass. The battery was defended by troops of Walcheren Island garrisons.

Cité Sainte-Barbe, Wittenheim, France, 2 February 1945 : On January 20th 1945, during the attack launched by the 1st Free French Army, aimed at eradicating the Colmar Pocket, the 9ème Division d’Infanterie Coloniale seized several villages north of Mulhouse, despite awful weather and the German tenacious defense. The 1er Bataillon of the 21ème RIC, led by Major Paris de Bollardière, was tasked to take the town of Sainte Barbe, defended by elements of the 159 I.D. and the Panzer Brigade “Feldherrnhalle”. During the night of the 1st of February, the battalion moved up to its line of departure, in a small wood about 500 yards west of the town. At dawn, in a creeping fog and freezing cold, the companies rushed forward to assault Sainte Barbe.