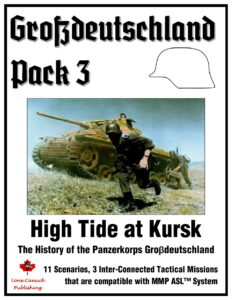 Nearly twenty years after the release of Großdeutschland 2 – Foraging der Stalhelm, Großdeutschland 3 – High Tide at Kursk picks up the story of the newly designated Panzergrenadier-Division Großdeutschland. The division is mechanized and equipped with a company of Tiger I heavy tanks, a battalion of Panther V medium tanks, and is apart of Generaloberst Herman Hoth’s 4.Panzer-Armee. Together with the 167.Infanterie, the 3.Panzer, the 11.Panzer Divisionen, make up the XLVIII Panzerkorps and along with the II.SS-Panzerkorps it formed the main striking power of the southern pincer arm for Operation Citadel.

Großdeutschland 3 – High Tide at Kursk is an 11 Scenario Pack with 3 interconnected campaign games that is compatible with MMP’s ASL System.

GD 17 OPENING MOVE: In what had become standard procedure for the Wehrmacht, the CITADEL offensive started late in the afternoon with a series of limited offensive moves designed to “blind” the forward Soviet units by capturing their observation posts and some strongpoints. This reconnaissance-in-force was also intended to supplement other intelligence by locating major defensive positions, and possibly open a lodgement against them for exploitation.

GD 18 GERTSOVKA STATION: Most of the leading German formations had staged into position for Operation CITADEL. Along both flanks of the Soviet salient, German assault groups moved out late in the afternoon to capture advanced Soviet observation posts and other strongpoints.

GD 19 PIONIERS FORWARD!: After several hours of delays caused by a Soviet bombardment on the German assembly area, the German assault along the southern flank of the Soviet positions commenced. Soviet positions, minefields, and deep mud all delayed the German panzers’ advance, leaving the leading infantry units pinned down under heavy fire without panzer support. The call went out for pioniers to get forward and clear a path through the minefields.

GD 20 THE NUT THAT IS CHERKASSKOYE: The XLVIII Panzerkorps’ first objective was the Psel River – some 30 miles away. To accomplish this mission, Großdeutschland would need strong panzer support on both flanks in order to force an immediate breakthrough. But that also meant cracking the nut that is Cherkasskoye; a village three miles behind the Großdeutschland’s start line, whose elaborately camouflaged defenses were manned by the 67th Guards Rifle Division.

GD 21 ASSAULT ON HILL 247: The Soviet units were dug in and offered stiff resistance. Großdeutschland’s advance throughout the day was slow, due to very heavy fighting; however, late in the day a kampfgruppe from the I./Grenadierregiment under command of Major Remer, reinforced by the division’s assault guns and heavy armoured cars, was able to push past Dubrova and assault Hill 247.

GD 22 PANZERKEIL: Early on 7 July, attacks by Panzergrenadierdivision Großdeutschland and the 11.Panzerdivision along the Oboyan Road broke through the defensive positions of the Soviet 3rd Mechanized Corps, putting the Germans in position to attack into the flank of the Soviet 31st Tank Corps.

GD 24 CRIPPLED TIGER: Crucial to the Germans’ attack were the panzers, especially the Tigers. Since the start of Operation CITADEL, Großdeutschland’s Tiger-Kompanie, which had 15 tanks in its order of battle, had lost 12 tanks, but still managed to field nine Tigers each morning. This feat was accomplished in no small part due to its salvage crews that headed out onto the battlefield as soon as possible to begin recovery and repairs of knocked out tanks.

GD 25 BEREZOVKA STOREHOUSE: While fighting raged to the east at Prokhorovka, Panzergrenadierdivision Großdeutschland attacked at first light into the seam between the Soviet 6th Tank Corps and the 3rd Mechanized Corps. Despite suffering heavy losses in previous days’ fighting and anxiously waiting for reinforcements to arrive, General Getman, commanding the Soviet 6th Tank Corps, rushed additional forces forward to meet the Germans’ attack.

GD 26 THE CLASH OF STEEL: The goal for the German XLVIII Panzerkorps, led by Großdeutschland, was to cross the Psel River and then turn east towards Kursk, trapping Soviet Forces in the Prokhorovka area between them and the II.SS-Panzer Korps. However, the Soviets were also planning a series of offensive blows designed to derail the German assault and hopefully encircle the leading German forces.

GD 27 VERKHOPENYE WOODS: Panzergrenadierdivision Großdeutschland had planned to continue the assault towards the Psel River, in conjunction with the 3.Panzer and the 11.Panzer Divisionen. To free forces for the continued advance, the German 255.Infanterie and the 332.Infanterie Divisionen took up the lines of the panzer divisions. Before the German offensive could develop, a Soviet counterattack led by General Kravchenko’s 5th Guards Tank Corps and General Burkov’s 10th Tank Corps completely upset the Germans’ plans.