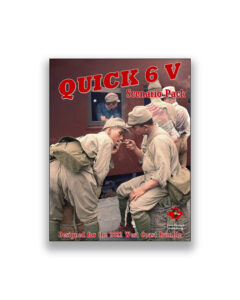 Designed for the participants of the 2022 West Coast Rumble, these six scenarios are designed for minimum set up time, resulting in maximum playing time.

Q26 – Encounter at Le Valtru, 16 June 1944: The 2.SS-Panzerdivision Das Reich was forced to delay its counterattack on the British penetration west of Caen in order to deal with the British 49th Division’s advance south from Rauray. This delay allowed the 9th Cameronians to occupy Grainville and the 7th Seaforth Highlanders to advance to the hamlet of le Valtru in effort to secure the right flank of the now named “Scottish Corridor”. Before the Seaforths could reach le Valtru, they were hit by Kampfgrüppe Weidinger of 2.SS-Panzerdivision Das Reich.

Q26 – Holzthum Hold Out, 16 December 1944: For the opening phase of Unternehmen Herbstnebel (Operation Autumn Mist), Oberst Heinz Kokott’s 26.Volksgrenadierdivision had one of the toughest tasks in that it had to clear the roads west of Our River for the panzers of the 2. and the 116.Panzer Divisionen. Crossing the Our in rubber boats at 03:00 hours and infiltrating their way past the American outposts, Oberstleutnant Kaufmann’s Füsilier Regiment 39 had reached Holzthum at 06:00 hours before anyone in the US 28th Infantry Division sector was even aware an attack was in progress.

Q27 – Stand at Sterlin’s Castle, 8 December 1943: By 0600 hours, the 1st Canadian Infantry Brigade had crossed the Moro River and established a bridgehead; supported by engineers and armour, the Canadians then launched attacks on San Leonardo. The Germans retreated and San Leonardo was at last secured, but counterattacks directed at the fragile bridgehead held by the hard-pressed Canadians were the order of the day.

Q28 – Going in Light, 9 June 1944: The immediate objective for the newly landed US 2nd Infantry Division was the village of Trévières, located just south of the Aure River. The plan of attack was for the 38th Infantry Regiment to strike directly at Trévières from the north and west, while the 9th Infantry Regiment would outflank Trévières by seizing Rubercy to the southeast – thus isolating the German position. It was no accident the Germans had chosen the tiny farm of Haute Hameau to make a stand against the approaching 9th Infantry. The old Norman farm with its stone wall courtyard formed an ideal defensive position, commanding the neighbouring country lanes running south in the direction of Rubercy.

Q29 – Como Ridge, 22 July 1945: In late 1944, the Australian Army had assumed responsibility for Allied operations on Bougainville, replacing US troops who were subsequently redeployed to the Philippines. Following the failed landing by the Australians at Porton Plantation, the commander of the Australian II Corps, Lieutenant-General Stanley Savige, decided to focus the main effort of the Australian campaign upon driving south towards the Japanese garrison at Buin, where the bulk of the Japanese forces were holding out.

Q30 – The Tombe Diversion, 1 July 1943: The initial plan for the capture of Viru Harbour called for a diversionary attack by Lieutenant Brown’s platoon on the small village of Tombe located on the east side of the harbour while the main body, under Lieutenant-Colonel Currin, would then attack the village of Tetemara on the west side of the harbour.