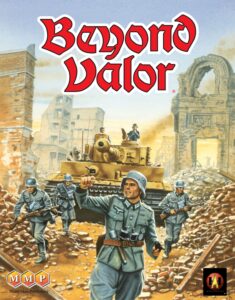 Beyond Valor 3rd Edition Scenario Fixes: Beyond Valor 3rd edition contains 24 scenarios that are playable with what is in the box. Scenarios 1-10 are the ten original ASL scenarios, published in the first and second editions of Beyond Valor. Scenarios 123-136 were previously published in other out of print venues (The GENERAL, ASL Annual, or ASL Journal) and are being renumbered with their inclusion in Beyond Valor. Previously identified errata have been incorporated, and some Victory Conditions and Scenario Special Rules have been reworded slightly for clarification. Five of the latter group have been changed to improve play balance and are annotated as updated.

M First Crisis at Army Group North (125): increase the game length by one turn and add one 447 and LMG to the Russian OB.
A7 Slamming of the Door (129): revise the circled numbers in the Turn Record Chart for the turn of entry of the German reinforcements and their relationship to the VC — circled numbers are now “2” in turn 2, “4” in turn 3, and “6” in turn 4, and the number of CVP the Russians must amass is increased by the circled number of the turn of entry of the reinforcements.
A8 The Agony of Doom (136): in the VC, changed “5 multi-hex buildings” to “4 multi-hex buildings”.
A21 Counterattack on the Vistula (134): in the VC increase the German CVP cap from 19 to 24 and in the German balance increase the German CVP cap to 29.
A80 Commando Schenke (126): add one 4-4-7 to the Russian OB and decrease the German SAN to 2.

Be the first to review “Beyond Valor – 3rd Edition” Cancel reply